With the holiday on May 9 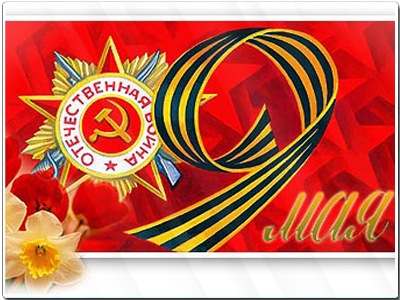 In any country a lot of holidays, they are dedicated to various memorable events. But the significance of one date cannot be overemphasized. We are talking about May 9, Victory Day. This holiday is considered the most great. I want to believe that, after many centuries, the feat of the Soviet people will not be erased from the memory of posterity — and the glory of the heroes. Perhaps such phrases for many sound pretentious, but it is an undeniable truth. The history of the world could go in a completely different, much more tragic direction. Only through the courage and sacrifice of our soldiers was defeated fascism.

Every year the terrible events of the great Patriotic War recede further from us. Alas, gradually leaving those who managed to survive a bloody battle, post-war everyday life. But we remember, love, appreciate and mourn those who could not live up to this light date.

1418 days were the most terrible war in history. This ordeal has left an indelible mark, so terrible, that the first celebration of Victory Day was incredibly powerful in its scope. The incredible relief people who have thrown off the yoke of fascism, resulted in tears and laughter, joy and greetings submitted to the city streets. The undoubted difficulties that must be overcome, and after the war, this day has lost its meaning. People believed that the future is sure to be beautiful and bright.

The first Victory Day was marked by the first salute is given in Moscow on 9 May. This event, perhaps, our story didn’t know neither before nor after 1,000 guns were given 30 volleys in a row, heralding the greatest event that changed the lives of all people. Another event, which later became an important tradition — the Victory Parade. On red square in orderly rows solemnly marched regiments of the victorious red Army. The end of the parade was no less memorable to the foot of the Mausoleum were dropped banners of the German troops.

That is strange — not always, May 9 was a day off, that is, a state holiday. Of course, people remember this date, however, the celebration of the great Victory, three years after the end of the war just got cancelled. Only 20 years later the festival has regained public status. In 1965 this day became once again non-working, returned parades, bright fireworks, a formal congratulations and recognition of the achievements and exploits of veterans.

Perhaps today the scope of the holiday is not celebrated as pompously and solemnly, but I want to say — we remember, appreciate and are grateful for the gift when the happy peaceful life. With the Victory!